The parishioners, fans, parents, alumni, faculty and students were out in force this past week as the JV Boys (American) Squad brought back to OLMC their Fourth Championship in a row! We got a few moments to sit with championship Coach Charles Suitt on this OLMC historic reign of wins. Make sure to read the interview and check out some of the photos below! 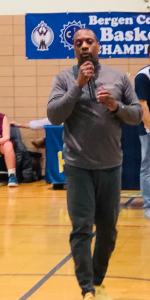 Coach Suitt, what do you think has been the key to the success of this group of boys for the past years?

I Believe the success of the group comes from consistency . These guys have been coached by me since the second grade. They are also classmates and friends which leads to great chemistry on the court.
Though we are often heavily favored to win, what are the challenges facing such a successful team like the Warriors– are there even any challenges?
The challenges that we face as a three time defending champion is ourselves. Health is always an issue for a team. As we speak our leading scorer won’t be able to play in the championship game because he was elbowed in a AAU game a couple of days ago. The great thing about this team is our culture. We believe “Next Man Up.”
Has there been a particularly favorite moment with this team over the past years?
The first championship win was a favorite moment for this team. It built confidence and a thirst to repeat. Winning at such a young age is transformative. We even had a Giants Super Bowl Champion come into our locker room prior to the game and show us all his ring. That was pretty cool.

Win or lose, what do you plan to do right after the season is over?

Win or lose I am super proud of these kids. One of our starters never played the game of basketball prior to last season. So we as a team are going to reflect a little and thank God for all of the blessings of good health and success then we are going to look forward to the awards dinner and spring break!